Beth Presswood wants to hide information and videos being spread against her false allegations against David Silverman. She has launched a campaign where anytime someone makes a video with her name she reports to Youtube and gets the video taken down for "violation of privacy" You have to go to other sites such as Bitchute to see videos about her.

Beth Presswood got David Silverman fired from American atheists with false allegations of sexual assault. She is an evil vile third wave feminist that hates men.

Matthew Wade Dillahunty (born March 31, 1969) is an American atheist activist who is the current president of the Atheist Community of Austin, a position he had previously held from 2006 to 2013.[3][4][5][6] He has hosted the Austin-based webcast and cable-access television show The Atheist Experience since 2005,[7][8][9] and formerly hosted the live Internet radio show Non-Prophets Radio.[10][11] He is also the founder of and a contributor to the counter-apologetics encyclopedia Iron Chariots and its subsidiary sites.[12]

Beth’s spouse Matt Dillahunty was on the board when they elected to renew my contract a year after this encounter. It seems odd that a person would continue on a board that made me President if they actually felt I assaulted their spouse. This board member also said, just last year when I asked if they wanted to talk about the fact that I played with their spouse without their ok, that we were “OK” and while they would not share the stage with some other people, they would still share it with me. Again, in my opinion, this is not something one would expect a person to say to someone they actually believed to have assaulted their spouse."

David Silverman testimony: "She is Rachael Elizabeth “Beth”  Presswood, the spouse of  board member Matt Dillahunty. Though they had an open marriage at the time, R told me her husband had vetoed us playing together, but then we played anyway, which was a massive moral failing on both our parts. I suspect the hard feelings involved in this exchange are one of the major reasons I did not get a hearing of any kind at American Atheists." 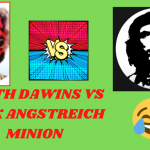